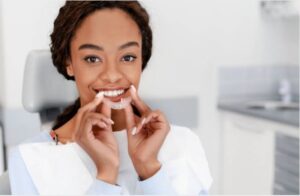 t Dental gives you more reasons to smile with our Invisalign treatment. This simple dental procedure improves tooth structure and straightens the teeth in just a visit or two.

The Invisalign is invisible, beautiful, comfortable, removable, and faster. It is a series of removable aligners designed in a lab. It is designed specifically for a person, according to the structure of their teeth. Meaning that two persons cannot use the same aligners.

The usage of Invisalign has continued to gain popularity over the years. Especially because of the absence of metal wires and its comfort. These invisible braces are available at Somerville & Medford, MA. For clear alignment of your teeth, we are the best bet.

We already know that to straighten your teeth, you can choose traditional metal braces or Invisalign. Before making the final decision, hold on a bit, let’s weigh the options and decide on the most suitable one. Here are some popular benefits of Invisalign:

How is Our Invisalign Dentist in Somerville & Medford Different From Others For This Service?

At our dental clinic, we don’t stop at Invisalign treatment. We educate patients on the care of Invisalign. Most people don’t know that it’s bad to use toothpaste on Invisalign. Or drink coffee or other black tea while wearing them. Therefore, we take it upon ourselves to educate patients on how to care for Invisalign. Our service is not limited to any age group; we treat children, adults, and the old aged. Get your aligner treatment at Somerville & Medford, and experience utmost satisfaction.

To Get Your Invisalign Treatment Done

Invisalign treatment is the clear choice for a visibly amazing smile. To learn more about the Invisalign treatment and all your orthodontic treatment options, please feel free to schedule an appointment at First Dental in Somerville & Medford, MA. We look forward to meeting you and helping you achieve a smile that’s made to move!

Maintain a healthy and beautiful smile with general dentistry

Brighten your smile and enhance your confidence with teeth whitening

Our experienced team is committed to your comprehensive
care with our stress-free and rewarding dental experience.

We look forward to getting to know our patients and helping you achieve optimal dental health. Feel free to ask any questions.

We provide a wide range of oral health care services to patients, from regular cleanings and exams to advanced restorative treatments.

Very knowledgeable about everything and helpful answering any questions that may concern you. And can’t forget the receptionist is very kind.

Staff is great and friendly, located in a nice part of Medford. They took me in right away when I desperately needed to have a wisdom tooth procedure done…

I found this dentist online  and I gotta say that if it wasnt for my move to NY I would still be a patient.